I had a bowl of cereal earlier and in my box of Golden Grahams was a Star Wars Pen. 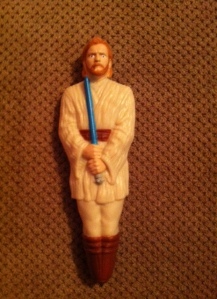 I guess the Golden Grahams people don’t know that they’re giving out pens to people who can’t write!  Ok, I CAN write, just not well, and definitely not with Star Wars pens.  My mom saw it still in its packaging and said “what’s this?” and I replied “it came in the box of Golden Grahams” and she said “a statue of Jesus came in your cereal?”